I realize that many people consider the bond market the boring side of investments. And in a lot of ways it can be. It can also be an important indicator of what may be coming. Most people have been lulled to sleep by bonds due to a nearly 30 year trend of slowly declining rates and very few swings of any magnitude or length. I think that is a big mistake and I'll try to explain why. Typically, I don't like to write too much about investment themes in my Friday thoughts because the information is written about by so many who do much better than me. But I think this is an important issue at this time that could have a big impact over the next year or two.

First, a few things that I want to explain about bonds and how they are often used in an investment portfolio. As you may know, a bond is a debt instrument where the bond issuer is indebted for the face value to the owner with a set maturity date and interest rate. It's important to understand that there are MANY different types of bonds and they all trade differently at times.

Most people are familiar with US Treasury Bonds. They are issued by the US government and are considered by many as one of the safest investments available, due to a perception that the US government will never default on their obligations. Because of that perception of safety, they tend to pay close to the lowest interest rate (at least in the US, we won't get into foreign bonds). They're issued in many lengths of maturity, up to 30 years.

There are also bonds issued by state and local governments, corporations, and non-profit organizations of all types. These also vary widely in maturity dates and default risk, based on the credit worthiness of the issuer. Typically, those with poorer credit ratings have to pay a higher interest rate on the bonds.

While there is a set maturity date for each bond, where it will be paid off by the issuer, bonds are bought and sold on a regular basis at market value. The market value is determined by many factors, but is largely dependent on prevailing rates demanded by bond buyers and length of maturity. When rates on new bonds goes down, the higher rate of an older bond looks attractive and will cause a buyer to pay more. If rates go up, the bonds with a rate below new rates aren't as attractive, causing the value to go down. Think of it as a seesaw. When rates go down, bond values go up - when rates go up, values go down. Also, like a seesaw, the further you are from the pivot point, the more you feel the swings up and down. So a 30-Year bond will have the value change more than a 2-Year bond when interest rates change.

Short term bonds - Interest rates and values of shorter maturity bonds are often impacted more by the prevailing rates of the Federal Reserve Bank's federal funds rate than other factors. This rate is what the central bank charges member institutions for very short term loans (often overnight). The federal funds rate also impacts the rate that banks pay on savings & CD's and what you earn in your money market fund. We can see this in the 1-Year US Treasury Bill recently. While the fed fund rate was effectively 0% from December of 2008 until December of 2015, the rate paid on 1-Year US Treasury Bills largely stayed between 0.08% and 0.20%from May of 2011 and when they started to raise rates on December 16th, 2015. The fed funds rate has now been raised 5 times since December of 2015 and the 1-Year Treasury rate has gone up, too. As of 1/23/2018, the rate on a 1-Year US Treasury Billis 1.77%.

Longer term bonds - While the Federal Reserve does have the mechanism to impact the interest rates and trading values of longer term bonds by buying or selling them, they have not historically done so, until recently. They have been buying (keeping rates down) since the Great Recession as part of their "Quantitative Easing" strategy, but have announced they will no longer be doing so as the bonds they own mature.

Longer term bonds tend to be more impacted by inflation, or the expectations of inflation, and the bond market's expectations of economic activity in the longer term. During the 1970's and early 80's, when inflation was very high, the 30-Year Treasury climbed to an all time high yield of 15.21% in October of 1981. As inflation has come down since the early 80's, so has the interest rates on longer term bonds. As we discussed earlier, when interest rates go down, the market value of bonds tends to go up. Hence, bonds have been in a bull market since the early 80's.

As a recent example of how long term bonds and their interest rates vary from shorter term rates, lets look at what the 30-Year Treasury Bond has done since the Federal Reserve has been raising the Fed Funds rate. On December 15, 2015 the rate on the 30-Year treasury was 2.991% and it did go up some after the Federal Reserve raised rates - to 3.103% by 12/31/15. But then it begun to slide down, unlike the shorter term rates. By July 8, 2016 the rate had fallen all the way to 2.098%. That's more than a full percentage point lower than it was paying just seven months earlier! Through the campaign season, the rate fluctuated some, closing at 2.557% on the day of the Presidential election. After Donald Trump won the election it shot up to 3.183% by December 16, 2016 on hopes that the new president would spur economic activity. Now, as the reality of a divided Washington has set in on the bond market, the 30-Year Treasury has slowly meandered its way back to a close on January 23, 2018 of 2.902%.

Why does this matter? - There are two main reasons why the bond market is worth watching in today's environment. The first is that I'm afraid that many investors, and their advisor's for that matter, have quit paying close attention to their bond portfolio and the risk that has crept in due to a 30 year one way trend in interest rates. The second is that if things continue on the path that we have been on since December of 2015, we may see an important economic warning light come on later this year or next year.

Traditionally, the portion of an investment portfolio dedicated to bonds has been there in order to be the shock absorber for stock market volatility. When stocks trade down, bonds tend to look more attractive, helping lower the fluctuations of a portfolio. This is largely due to the perceived safety of bonds and the fact that interest rates tend to not change very rapidly. Due to rates being so low, and staying there for a prolonged time, many investors have been dissatisfied with the return they're getting on their bonds. So they, or they're advisor, are getting into bonds issued by companies with poorer credit, buying bonds with longer maturities, or just lowering the amount in bonds and allocating more to stocks. All of these actions are lowering the effectiveness of that shock absorber on the total portfolio.

The second reason that I'm watching bonds and interest rates is that we could see a phenomena called an inverted yield curve if the current trend of shorter rates going up while longer term rates go down, or even stay the same. This happens when the interest rate paid on shorter term bonds exceeds that paid on longer term bonds. I'm watching the spread between the 2-Year Treasury and the 10-Year Treasury. The chart below shows this spread since 1976. Each time that the yield curve has inverted, we have seen a recession follow. Let me be clear - we DO NOT have that scenario at this time. We have gone years with a flattening curve and periods where spreads stayed low for quite a while (1995-2000), and they never inverted. I'm simply saying that this is something to pay attention to. 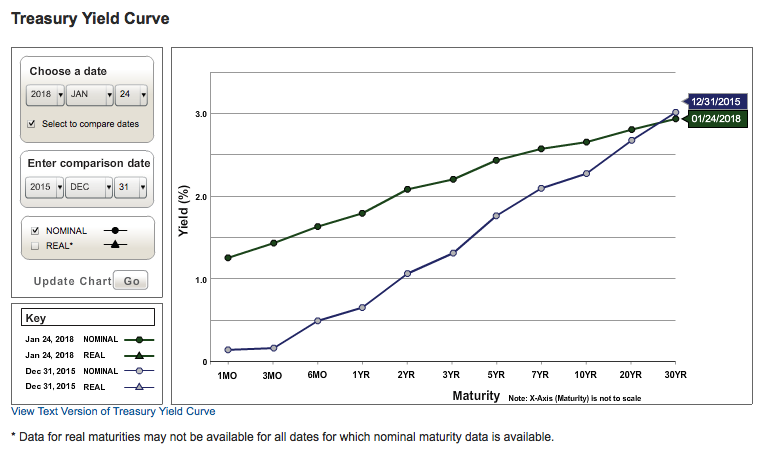 So now what? - I'm sharing this with you because it's something I'm really watching and I'm concerned not enough investors are doing the same. The economy seems to be doing well. Stocks are up. Taxes seem to be coming down, leading companies to give bonuses. And investors seem to be feeling comfortable adding risk to their investments without fear of the repercussions. But as Sir Issac Newton taught us - For every action, there is an equal and opposite reaction. As you take money from the old boring bond portfolio and add to stocks or higher yielding bonds, you are increasing the chance for higher volatility. It's important to stay in a well balanced portfolio, with high quality holdings, where your risk tolerance is in line with that of your investments and it's all aligned with your long term goals. Every time that I've read "The Tortoise and the Hare" the tortoise has won the race - every time!

If you want to talk further about your bond holdings or about the risk in your portfolio in general, please don't hesitate to give me a call or reply to this e-mail. I will be here all week next week, but Thursday and Friday I will be in and out as it will be winter break at Wilson Hall and my daughter will be wanting some of my attention.