I hope that you have been able to enjoy the spring like weather recently without having too many allergy reactions. Nancy Lee and I are taking the kids to the Shaw Air & Space Expo tomorrow to see the Thunderbirds and all of the other performers. I’m so excited and ready to go. It’s been fun to see them flying around town over the last few days.

The big financial news of the last few days has been the “inversion of the yield curve”. Typically, longer maturity bonds pay a higher interest rate than shorter maturity bonds. That makes sense, as investors demand a higher payment for having their money tied up for a longer period of time. When charted out, with interest rates on the left and length of maturity on the bottom, there is usually a nice curve from bottom left to upper right. 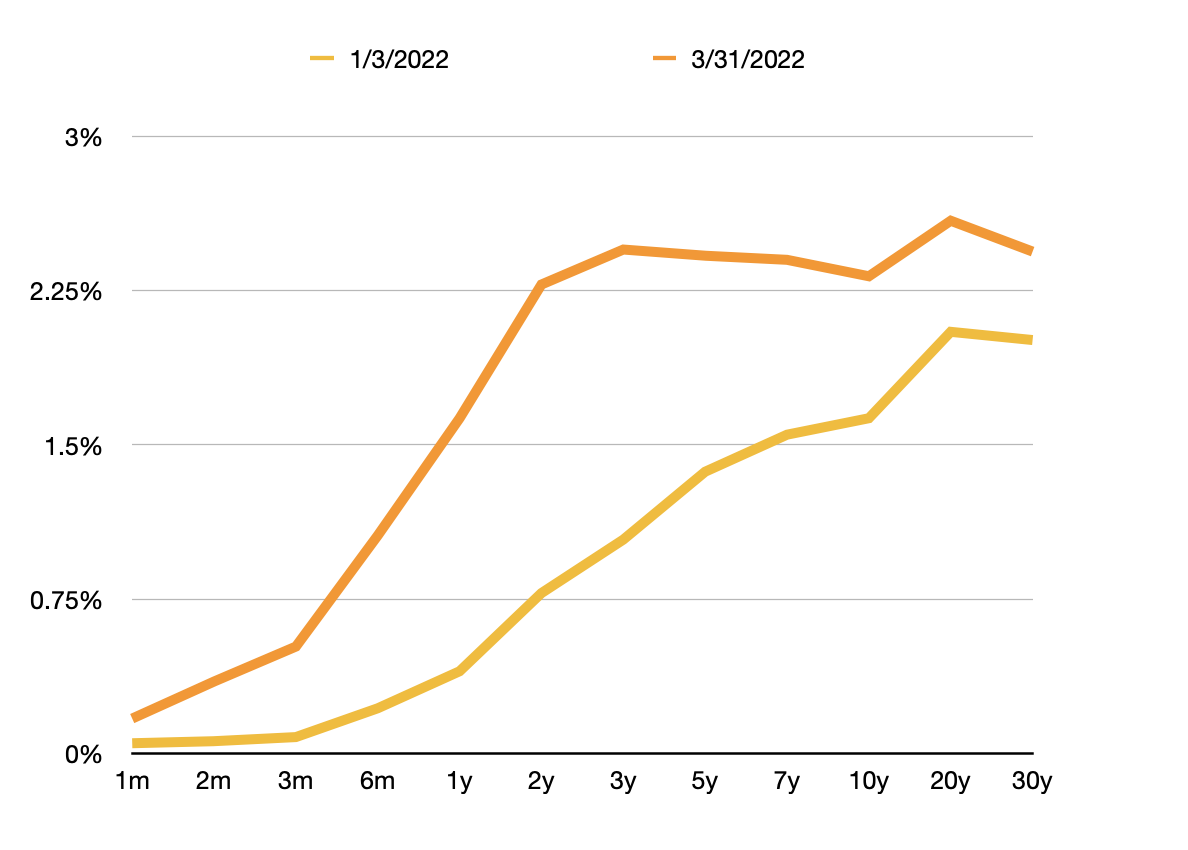 The media is quick to point out that the yield curve inverting has been a reliable indication of a coming recession. But, like usual, there’s a little more to the story. The yield curve last inverted in 2019, and we had a short recession due to the COVID shutdowns in 2020. However, the yield curve inverted well before we even knew what COVID -19 was, so I don’t count that as a successful “predictor”.

Why does the yield curve invert? This is a complex issue, but in simple terms, investors are demanding higher rates for shorter maturities because they are concerned about financial prospects in the shorter term. At the same time, they’re willing to invest, at lower interest rates, for the longer term maturities.

Historically, it has been one of the better gauges if a coming recession, but it isn’t perfect, especially in its timing. The yield curve inversion has often preceded a recession by more than a year. With that kind of delay, many other factors and indicators could come into play and make it sooner or later, more severe or more mild. The inversion happened more than a year before the Great Recession of 2007- 08, in January of 2006. The S&P 500 didn’t top out until July of 2007, a year and a half later! And, it had a pretty substantial gain in that year and a half before falling.

While every situation and time is different and unique, I really dislike the phrase “this time is different”. The main reason is that every time is different. But, like Mark Twain said, “history may not repeat itself, but it sure does rhyme.” I prefer to look for patterns and trends, rather than calling specific tops and bottoms. Is it possible that we’re heading into a recession right now, no one can effectively tell. But if not now, we will at some point.

One thing not mentioned in the media - recessions are very normal, and actually necessary. In our modern economy (pre-industrial revolution), we seem to have a recession about every 5-7 years. This is due to human nature and not a new phenomena. In the Old Testament of the Bible, the Jewish people recognized a Jubilee every 7 years, where they cleared out everyones debts and restructured their finances.

We, as humans, tend to think that however we feel today will be that way for perpetuity. When times are good and prosperous, we think they will always be that way. And, vice versa. When we think things will be good for years to come, we stretch ourselves. We buy things we probably shouldn’t be spending on. We buy that little larger truck, or bigger house, even if it stretches our budget. We’ll be getting a raise next year, so it’ll be easier to afford then. And that works, until it doesn’t.

A recession gives people and businesses a chance to pause and reflect on what they need to focus on going forward. It gives the economy the opportunity to take out the “trash”. While we don’t like to admit it, there are businesses that are not efficient and productive. There are companies that have not generated positive cash flow for a number of years and have only been able to survive by taking on more cheap debt. The resources being used by these “zombie” companies get a chance to be used for productive and efficient businesses after a recession takes those zombies out. Employees who have been struggling to keep the wheels on a struggling business get the chance to go work on a successful enterprise.

For some reason, many politicians and regulators think that they can stop or minimize recessions and I think it’s foolhardy. You have about as much chance of doing that as you do stopping the sun from setting tonight. I think that all of their efforts are actually making the recessions we do have worse. Their efforts at artificially keeping interest rates low and equity prices high are simply delaying the inevitable and resulting in unanticipated issues, such as high inflation. And by encouraging the excesses, they are creating the foundation for substantial resets.

My encouragement for you is to not get too worried or concerned about the idea of a recession. Don’t make decisions based on something that “may” happen. It is going to happen, just as it always has. But, we don’t know when. Because we never know when it will happen, it’s impossible to time your investments in and out of the stock market appropriately. Rather, stay invested for your long term goals.

If you have any concerns, or simply want to go over your portfolio to see what your risk exposure to a recession is, please feel free to give me a call, or schedule an appointment on my online calendar.

Meanwhile, let’s all turn off the TV and go outside to enjoy this amazing spring weather.

The views stated in this letter are not necessarily the opinion of First Allied Securities, Inc. and should not be construed directly or indirectly as an offer to buy or sell any securities mentioned herein.  Due to volatility within the markets mentioned, opinions are subject to change without notice. Information is based on sources believed to be reliable; however, their accuracy or completeness cannot be guaranteed.  Past performance does not guarantee future results.